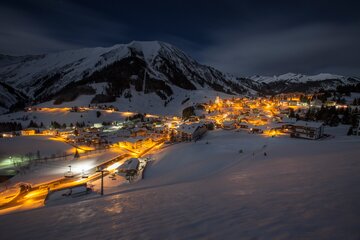 THE MOST BEAUTIFUL CUSTOMS FOR NEW YEAR'S EVE

New Year's Eve is just around the corner and with it the start of the new year. There are many customs - some very familiar, others long forgotten. We have collected the most beautiful and funniest ones. Maybe they will inspire you for your New Year's Eve?

New Year's Eve means the same thing all over the world: The old year is celebrated vigorously once again to give way to the new year punctually at midnight. This in turn promises good luck, success, perhaps a new love - the bad is simply left behind. And to make sure that luck really does come, there are various customs that are supposed to help.

Customs around the dear money

In Germany, for example, it was long traditional to put a scale from the carp you ate on New Year's Eve into your wallet. This was supposed to help ensure sufficient money in the coming year. Lentils, which resemble small coins in their shape, were also eaten as a side dish for this purpose. They were also considered a symbol of the desired prosperity.

Chase away the evil spirits

Did you know why people actually shoot fireworks into the sky on New Year's Eve? Sure, it's a neat spectacle and looks really great. But originally, the light and noise that it inevitably creates were meant to keep away evil spirits. In some areas, blacksmiths were charged with this before the time of the fireworks: they would gather around an anvil and take turns hammering it. Perhaps we should return to this this year - because in many regions there will be no New Year's Eve firecrackers this year.

Customs for more happiness in life

Marzipan pigs, chimney sweeps and four-leaf clovers are all popular New Year's Eve gifts because they promise good luck. Even the ever-popular lead pouring - which for health reasons may now only be poured with wax - is widespread and needs no further explanation. But have you ever heard that in Spain, according to tradition, you are supposed to eat twelve grapes? It may only be started at the first stroke of the bell at midnight. If you manage to eat all the grapes at the last stroke, you are promised prosperity and good luck. But even if you don't make it, the full cheeks always make for a good laugh.

In Southern Europe, a custom apparently helps bring about new love and general happiness in the coming year. But it is aimed only at the ladies: They are supposed to wear red underwear on New Year's Eve. Not just any underwear, though: it must have been a gift and should be "worn" for the first and only time on New Year's Eve.

Austrians also have their various customs on New Year's Eve. For example, have you ever heard of dancing into the New Year? Traditionally, everyone grabs a dance partner at midnight and sways to the waltz across the year's border. And it's by no means just the older Austrians who do it this way: young people also like to dance along. Whether this is supposed to lead to more love or just more happiness in general is no longer clear today. But let's be honest: If you have a great dance partner, that wouldn't be a bad opportunity for another round, would it?

And even if you might laugh now: For many, it's an absolute custom to watch a very specific movie on New Year's Eve. Does that ring a bell? Of course, it's "Dinner for One." The 18-minute sketch is played out on New Year's Eve on so many stations and reaches a new record in viewer numbers on video portals every year that there's virtually no getting around it anyway. In 1988, it was even entered into the Guinness Book of Records as the world's most repeated television production. So why not resign yourself to your fate and watch it again this year? Loosely based on the motto, "The same procedure as every year, James!"

No matter what custom you decide to do on New Year's Eve: We wish you and your family a happy new year in 2021, and certainly an exciting one.